This project, #barmen2bozeman, is about retravelling my great-great-grandfather’s 1880 journey and exploring German-American heritage and culture.

From May 2016 until October 2016, I will retravel the route my great-great-grandfather Otto Dahl travelled from 1880 – 1882 from Wuppertal-Barmen in Germany to Bozeman, Montana in the United States of America. During my trip, I will explore how alive German culture is today in the US and blog about that.

The name ‘Explories’
At first, I called the blog and all channels “barmen2bozeman”, but realized that this is not a smart long-term-decision and somewhat a long name. After a night of brainstorming, I decided on “Explories”, a merger between the words “exploring” and “stories”.

Born in 1854 in Barmen (now a part of the city of Wuppertal in Germany) he became a leather manufacturer just like his father. 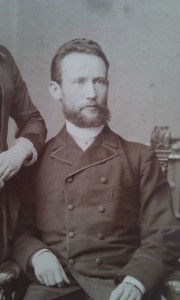 He started in the 1920’s to write his memoirs which my grandmother later typed up and printed a book from for every family member. I am publishing the part of his America journey on this blog.

He married 1885 and had five children, his third child was Victoria (born 1889), who is the great-grandmother of Sibylle.

Born in 1989, raised in the Stuttgart area in southern Germany.
Studied business and tourism management and worked in destination marketing.

The victorian dress from 1880

This was actually my mother’s idea. She asked one day “you are recreating an 1880’s journey, why aren’t you doing this dressed accordingly?” – And here I am, travelling with my beautiful victorian dress.

Here is the video about the creation of the dress: